To share your memory on the wall of Rudy Gerlach, sign in using one of the following options:

Passed away peacefully on June 5, 2019 with his family by his side. He was born February 7, 1926 in Sanok, Poland to Walther and Zofia Gerlach, and was a brother to Danuta and Izabela.

Passed away peacefully on June 5, 2019 with his family by his side. He was born February 7, 1926 in Sanok, Poland to Walther and Zofia Gerlach, and was a brother to Danuta and Izabela.

Rudy emigrated to Canada in the spring of 1948, alone, to make a better life following WWII. Employed by CP Rail as a Track Worker, he settled in White River. When the Kimberly-Clark Mill started in Terrace Bay, he moved there and worked in various positions until his retirement in 1986. Rudy was also a manufacturer of snow shoe harnesses and a shoe repairman.

He met his wife Doris (Montey), and they married in 1953. Together they built a house over looking Lake Superior and filled their home with seven children. Rudy was well known for his beautiful flower beds and vegetable gardens in the summer, and was President of the Horticultural Society. He also spent many winter nights at the Curling Club. He was a “fixer” and was always tinkering outside or in the garage, coming up with some sort of invention to make a job easier. With giving Sundays to his family, time was spent exploring the surrounding area with many picnics at Rossport Beach, Rainbow Falls and Jackfish or an hour of blueberry picking - always followed with ice cream. In retirement, Rudy and Doris enjoyed a few winters in Florida and Texas, but he still loved his home surroundings and ventured into camping at the local campgrounds. In 2009 he and Doris left their home and moved to Southern Ontario, and eventually lived in a care home until his death.

Rudy is survived by his wife Doris of 67 years, his sister Izabela and nieces and nephews in Poland, and his children: Jim (Colleen), Richard, Michael (Leslie), Mark (Valerie), Paul (Paulette), Nancy (Scott) and Linda (Matthew). He is also survived by 12 grandchildren and 8 great-grandchildren.

A family service has taken place in Kingston, ON, and interment will take place in Terrace Bay on Tuesday, June 11, 2019 at 11:00 am. In lieu of flowers, donations can be made in Rudy's memory to The War Amps or the Heart and Stroke Foundation, or perhaps you can raise a glass of “Canadian” and toast a wonderful life. Online condolences at www.wartmanfuneralhomes.com.
Read Less

To plant a memorial tree in honor of Rudy Gerlach, please visit our Heartfelt Sympathies Store.

Donations are being accepted for:
HEART AND STROKE FOUNDATION OF ONTARIO THE WAR AMPUTATIONS OF CANADA

We encourage you to share your most beloved memories of Rudy Gerlach here, so that the family and other loved ones can always see it. You can upload cherished photographs, or share your favorite stories, and can even comment on those shared by others.

Plant a Tree in Memory of Rudy Gerlach
Plant a tree 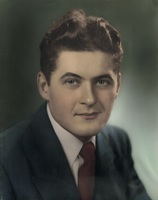