To share your memory on the wall of John Cutbill, sign in using one of the following options:

Receive notifications about information and event scheduling for John

There are no events scheduled. You can still show your support by sending flowers directly to the family, or planting a memorial tree in memory of John William George "Jack" Cutbill.
Plant a Tree

We encourage you to share your most beloved memories of John here, so that the family and other loved ones can always see it. You can upload cherished photographs, or share your favorite stories, and can even comment on those shared by others.

Posted Oct 01, 2020 at 11:16am
To All Who Loved Uncle Jack,
We are deeply saddened by his recent passing but take comfort in knowing he is at peace with other loved ones who went before. He was a beloved Husband, Father, Grand-Father, Great-Grandfather, Brother, Uncle and Friend. We look forward to sharing many memories in the spring when we gather as a Family. A memorial donation has been made to Christie Lake Kids a place where Uncle Jack's name is still known. In our hearts forever, Lynne, Bill, Elizabeth, Rebecca and Daniel
Comment Share
Share via: 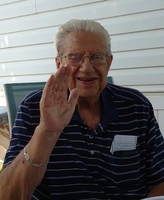