To share your memory on the wall of Harry Wells, sign in using one of the following options:

Harry was born on February 4, 1944, in Bryn Mawr, Pennsylvania, to Harry R. Wells, Sr. and Olga Cushing Leary, Jr. He attended Middlesex School before pursuing a bachelor’s degree at Cornell University and joining the Acacia social fraternity. Although he entered as an engineering student, Harry ultimately found success in the horticulture program. He went on to purchase land in Virginia and open Nonesuch Nursery in Pamplin, providing trees for the Seattle World’s Fair and winning prizes throughout the mid-Atlantic for his nursery work. Shortly after moving he met and married Tina; together they had three children.

After operating the nursery for 20 years Harry retired. In 1991 the family moved to a farm known as Cork in Darlington Heights and transitioned to raising Hereford cattle. Following his second retirement, his lifelong passion for collecting oriental rugs developed into a small business. Harry traded rugs with friends all over Virginia, North Carolina, and Pennsylvania. In his later years he divided his time equally between Ontario and Virginia, making many dear friends. He was known by all for his exuberant personality, eccentric ideas, and enthusiastic enjoyment of life. He passed away near Glen Island, his beloved vacation home since childhood.

Friends and family are invited to attend a party in his honor on Sunday, August 18, from 3-5pm at 2876 Bloomfield Road, Cullen, VA. A celebratory gathering will also be held on Monday, September 2, from 3-5pm at 42 Youngs Point Road, Greater Napanee, ON. In lieu of flowers, the family requests that donations be made to The Nature Conservancy (www.nature.org) or the Depression and Bipolar Support Alliance (www.dbsalliance.org). On-line condolences at www.wartmanfuneralhomes.com
Read Less

To send flowers to the family or plant a tree in memory of Harry Rife Wells, please visit our Heartfelt Sympathies Store.

Receive notifications about information and event scheduling for Harry

We encourage you to share your most beloved memories of Harry here, so that the family and other loved ones can always see it. You can upload cherished photographs, or share your favorite stories, and can even comment on those shared by others.

Posted Aug 20, 2019 at 05:40pm
Harry, you will be so missed, we have known you for 15plus years and have shared jokes, wisdom, conversations about everything and nothing. You will be remembered for many things, the auctions we went to, yard sales, your hats, legs, never wearing shoes, your love of many things. To his family, please accept our condolences on the passing of Harry, please know he was well loved by us, and he will not be forgotten. Gaëtan and Susan
Comment Share
Share via:
FM

Posted Aug 14, 2019 at 03:31pm
Sorry for your loss. It was just the other day we were at his yard sale , Lots of laughs as usual . He will be missed Frank and Carolyn Maybury. 32 Quinte View road
Comment Share
Share via:
JK

Posted Aug 13, 2019 at 08:56pm
We are very sorry for the loss of you dad Harry. Even though we only knew harry for a year and a half. We were one of his Napanee friends. Harry lived beside us on the piece of land he had access to. To go over to Glen Island. Holly Molly he like to talk and talk and talk about the trees, well about anything. He was very interesting to say the least. I liked the way he laughed. He loved that island. If i had my way ,i would rename it Harry's Island. You will be missed Harry. I hope you are finally at peace, you deserve it. :) Janice and Terry (fur babies ) Matty and Gracie.
Comment Share
Share via: 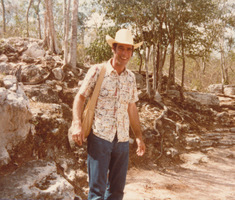