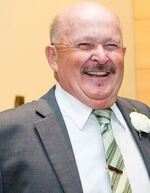 It is with a heavy heart we announce that Douglas David Waldie passed away peacefully at the Kingston General Hospital surrounded by loved ones on March 26, 2021. He was born February 3, 1949 in Winnipeg, Manitoba and raised in Atikokan, Ontario. He attended the University of Windsor right after high school in 1968, where he achieved his Bachelor of Arts with a major in history. He travelled around to various locations exploring the world and even attending one year at Queen's University in 1977 before moving on to other projects. He did end up returning to Queen's to complete a Bachelor of Arts in Film Studies as Artsci'07, he loved to joke with his fellow alumni that it took him 30 years to graduate. He ultimately settled down in Kingston, Ontario, though he still maintained his childhood cottage on Nym Lake along with his sister Adele, as an entrepreneur, salesman and loving father. He was extremely proud of his kids and demonstrated how much he loved and supported them on a daily basis, they are extremely lucky to have had such a caring father and will always remember the lessons he taught them. He loved telling stories, laughing, partying and having interesting conversations with anyone who came across his path. He had the innate ability to befriend anyone with his sense of humour and could always be found at the center of the excitement with a twinkle in his eye and smile on his face.

He will be dearly missed by his two sons, James (Stephanie) Waldie and Brent Waldie, by his older brother Brent (Kathryn) Waldie, and younger sister Adele (Robin) Crowley as well as his nieces and nephews Cameron, Amanda (Ryan), Megan (Brad), Sean.

He was predeceased by parents William (Russell) Waldie and Hazel Waldie.

Due to covid restrictions, a private ceremony will be planned at a later point in time, in lieu of flowers the family would prefer donations in Doug's memory be made to Martha's table in Kingston, whom Doug has worked with in the past to help those in need.